At the Mountains of Madness – H.P. Lovecraft

Long before “found footage” horror genre was a thing, H.P. Lovecraft was doing something similar. He did first-person letter narration, and it is quite amazing. In a nutshell, we’re told the consequences of a story directly to us, which is much different than witnessing the action unfold. The latter wouldn’t have the same impact in recapping the futility and insignificance of mankind. The desperation intensifies because the narrator already knows the outcome of the narration and the futility it represents.

Many people find Lovecraft tedious to read. This is mostly because of his “liberal” use of adjectives to describe things.

But, I beg to differ.

This adjective-rich style sets the mood for the cosmic horror he writes about. and is used as a tool to depict otherwise indescribable things. Although he sometimes got carried away, still Lovecraft used this style almost perfectly.

And nothing is a better example of Lovecraft’s genius than At the Mountains of Madness. Written in 1931, and published in 1936, it is the magnum opus of Lovecraft.

At the Mountains of Madness – Plot Summary

In a true Lovecraftian style, the story of At the Mountains of Madness is told in first-person narration by William Dyer. He is a geologist professor at the Miskatonic University in Arkham. The story is told after the events at the Mountain of Madness transpired.

The novella begins with Dyer’s writings to disclose what happened during the expedition he led to Antarctica. His reason to tell such a horrible story is to prevent the new scientific expedition to Antarctica, which is heavily promoted in newspapers and media. He wants to prevent this new expedition from suffering the same fate as his did. In his letter, he describes in detail what happened to Professor Lake’s advance group. This includes how they all died, killed by ancient horrors. And, how he and his student discovered the eldritch ruins and the horrible secrets lying high in a mountain range in Antarctica.

Professor Lake’s group was sent days before the whole expedition. They discover something buried in the base of a mountain range in the North-West of Antarctica bigger than the Himalayas.

What's found are fourteen barrel-like life-forms, never before seen or known to science. These were neither animals, nor plants, but something in-between. Something else. Lake’s group found them deep in the stratum of the soil, with Cambrian age fossils dented with tools around them. This makes these life-forms at around 500 million years old. Cambrian fossils are simple, and these creature’s complexity is defiance to what evolution stands for.

Out of the fourteen specimens, six were damaged while seven were intact. Lake recalls the “Elder Ones”, creatures of myth mentioned in the “Necronomicon” written by the Mad Arab and names these creatures as such. 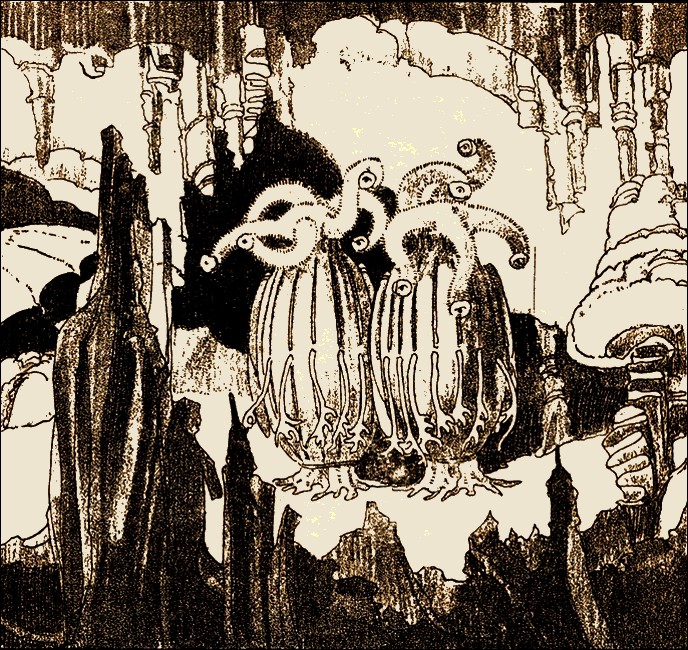 William Dyer and his colleagues go to investigate Lake’s camp after the main expedition loses contact with the advance group. What they find is devastating - the camp is ruined and most men and dogs slaughtered.

Upon further investigation near the campsite, they find the six mounds with the damaged creatures under them. The seven preserved ones were gone. And, they find a man and a dog who were a subject to a crude dissection experiment.

One of the expedition’s crew, Gedney, was not among the dead, alongside one of the dogs. Dyer’s group suspects Gedney went mad, killed everyone, and fled. 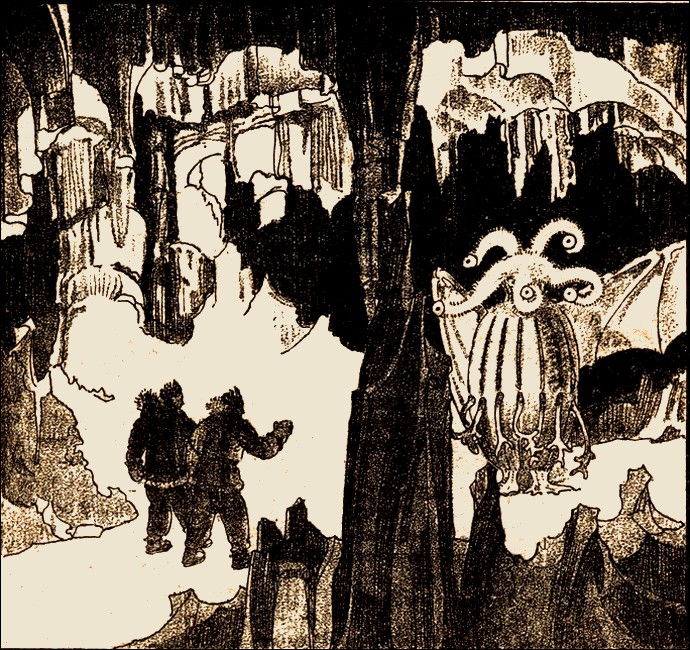 Dyer and a student of his, Danforth, fly an airplane over the mountains. They discover something both fantastic and horrifying. The mountain range is, in fact, the outer range of a huge, abandoned city with alien architecture. The shape of buildings was completely paradoxical, with cubes, cones and weird geometric shapes that should not be. Yet they are.

The two land the plane and begin exploring. From hieroglyphic murals covering the walls of these structures, they learn the history of the Elder Things (or Old Ones). As the murals explain, the Elder Things came to Earth when the Moon got separated from the planet. For the building of their cities, they genetically engineered creatures named Shoggoths. These creatures could take any form and reflect any thought. They created all life (by accident, from the residue of their creations the Shoggoth.)

As Dyer and Danforth explore, they find more fragments and the histories of races beyond mankind’s comprehension. These include the wars between the Elder Things and the Star Spawn of Cthulhu, the Cthulhi, and the Mi-Go race who arrived after the Old Ones did. The murals reflect the whole passage of time for the Elder Things. How their civilization degraded after the Shoggoths rebelled against their masters. Their whole race devolved from god-like creators to primitive gatherers because of this conflict. Their main objective became survival instead of knowledge. This fact is obvious in their murals becoming more and more primitive as history goes onward.

Lastly, the murals point out that some terrible evil, unknown in name, is located in a larger range beyond the city. And it terrifies the Old Ones. The last of the murals explain when Antarctica became uninhabitable, the Elder Things moved to a large, subterranean ocean. 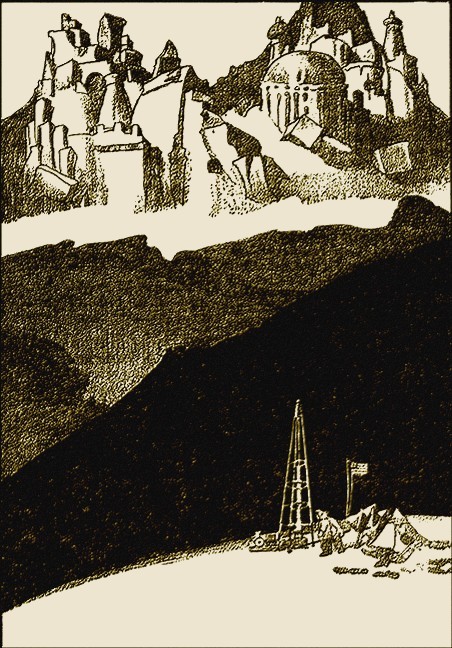 Dyer and Danforth realize that it wasn’t Gedney the one who killed Lake’s group. It was the seven preserved Elder Things who returned to life, killed the crew, and fled into the city.

The two discover traces of the Elder Things, including the corpses of Gedney and the missing dog from the advance camp. As the narration nears its peak, the pair is nearing a huge entrance. The two relate it to the region described in the murals, and they stride onward. Here, they see huge, six-foot-tall, blind penguins wandering around, and bodies of Elder Things who died in a savage struggle. Then, horror comes from the depths. A bubbling mass of protoplasm with eyes continuously appearing and disappearing. A Shoggoth. Both escape, having luck and wits on their side and fly the plane to safety.

As they are high above the plateau of the eldritch city, Danforth looks beyond the city itself and sees something that causes him to go completely mad. He adamantly refuses to tell a soul what he saw. We know that it has something to do with the murals depicting that unnamed evil the Old Ones were afraid of. 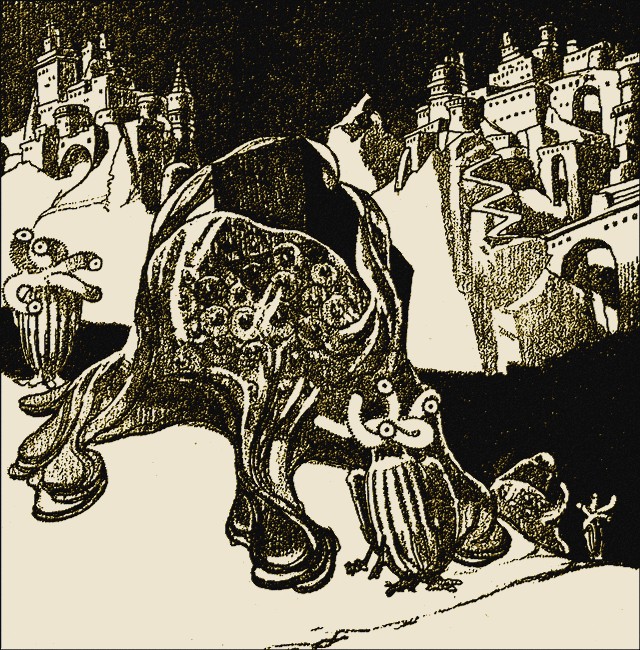 In the end, Dyer states that the Shoggoths brought the Old Ones to their knees. The creation killed the creator. The Shoggoth the two encountered was living of the penguins, using them as livestock.

Dyers begs the next expedition to leave the Mountains of Madness be. Such things unimaginable by mankind should not be set loose on the Earth.

To understand why this work is great, you need to first know who Lovecraft was.

Lovecraft was a strange person. Leaving all the blatant racism aside, as it wasn’t a product of his person, but of the society in his day, he was still very weird.

And the weirdness probably comes from his story. You see, the story of Lovecraft is quite sad. He died in poverty and was never famous during his lifetime. The only success he had was being published in small pulp magazines, and he got paid very little in return.

It was only after his death that followers like Bloch, Howard, and Derleth made him famous. Today, he’s considered as one of the most important authors of the 20th century.

At the Mountains of Madness Was Initially Rejected!

As I said above, Lovecraft only published his works in pulp magazines. When he came to Weird Tales (the magazine he was writing short stories for) with the novella At the Mountains of Madness, it was rejected. The reason for this was because it was too long.

The rejection made Lovecraft shelve it for the next five years.

The first publication was in 1936 in another magazine, named Astounding Stories.

What Lovecraft got out of his greatest work was around $300. A great pity, and a shame.

It’s First Publication Was a Travesty

Although Astounding Stories published it, the story was heavily edited. They butchered it, and whole passages were omitted. Lovecraft’s corrections of the text were used in the first Arkham House edition (a magazine formed in his honor). Still, this wasn’t the correct version of the text. A restored version of the novella was published in 1985, which is almost 50 years after it’s initial release.

Some Fun Facts about At the Mountains of Madness

Perhaps you’re just now getting familiar with this novella. Is this all new to you, or have you seen it elsewhere before? Let me elaborate:

The First Alien Movie Is an Indirect Adaptation of this Novella

As the Alien writer Dan O’Bannon puts it, the tone of Aliens is a direct copy of Lovecraft’s work. In my opinion, alien borrowed way more from At the Mountains of Madness than they would admit, including:

-The Alien eggs, which are very similar to the barrel shape of the Elder Things,

-The derelict ship located on a cold planet, which is a re-imagination of the ruined eldritch city

-The alien itself isn’t a direct copy of the Shoggoth, although in the ship it’s evident that a struggle between the crew and the aliens happened, much like the struggle aftermath Dyer and Danforth witness near the end of the novella.

The Thing in “The Thing” Is a Shoggoth

Although many fans of The Thing, and the novel the movie is based on, Who Goes There? might suggest otherwise, the similarities are painfully obvious.

An expedition on Antarctica discovers an alien shape-shifting creature and a derelict ship (duh, similar to what Alien did later) buried deep below the ice. And, the creature comes to life and starts killing everyone by assimilating them.

Not to mention that the Thing itself resembles a Shoggoth. It can take any form, and assimilate any living organism.

The truth is the two works were published two years apart, Lovecraft’s being the first. So, there is solid ground to these claims. Campbell, the author of Who Goes There? wouldn’t have admitted to this borrowing due to copyright anyway.

Guillermo del Toro Was to Make a 1:1 Movie Adaptation

In a perfect world, this would’ve been made a decade ago, but we aren’t so lucky. Del Toro was pushing to make this film, but the recent addition to the Alien saga, Prometheus, was too similar. This might be the final nail in the coffin of this effort.

Del Toro won an Oscar for best director for The Shape of Water. This might just give him, and us, the break to finally get his motion picture done.

Other famous names closely related to this project are James Cameron and Tom Cruise.

Chances are you’ve heard about Cthulhu and the whole mythos, but have never read any of Lovecraft’s stories. At the Mountains of Madness is a great place to start, as it is his best work. Lovecraft might not have a style that’s great for everyone. My advice to you would be to pay attention to the idea of the story, and not the style he writes in. You’ll notice a pattern of cosmic insignificance that’s so present in today’s pop-culture, which originally came from Lovecraft himself.

Other stories that might be a great place to start are:

The Colour Out of Space

The Shadow over Innsmouth

The Rats in the Walls

The Call of Cthulhu (not his best work, but most famous one)

The Dream-Quest of Unknown Kadath