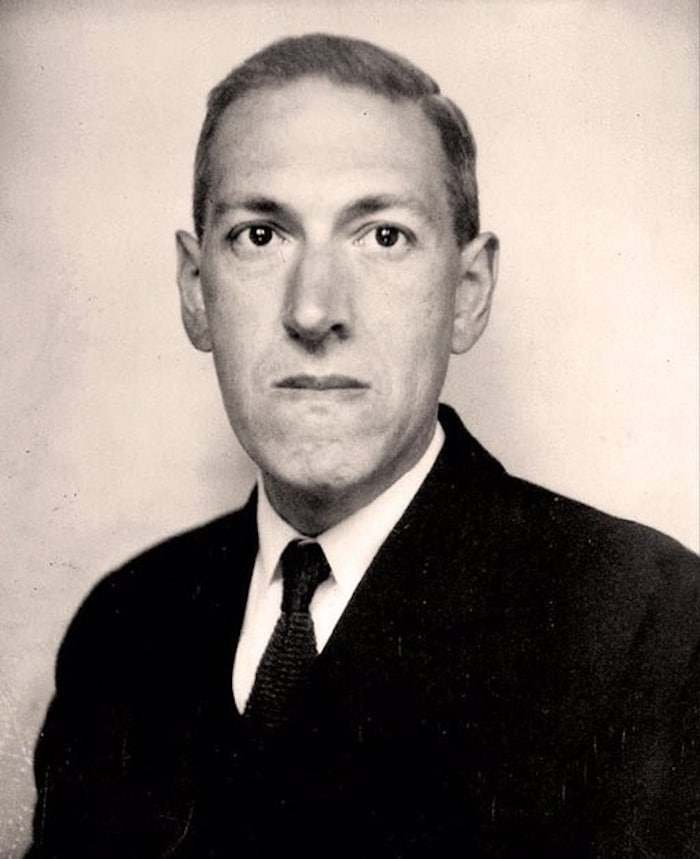 In the year 1890, under the gibbous moon, a thing fantastical in nature, yet unknown to mankind, a small being, yet great at the same time, was born.

I’m talking, of course, about the birth of H.P. Lovecraft. 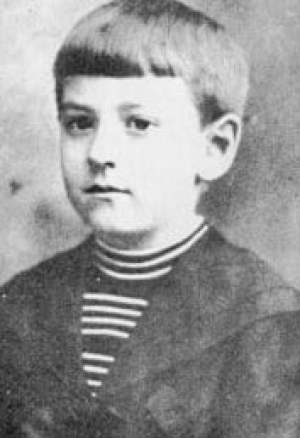 Howard Philips Lovecraft was born on the 20th of August 1890 and died March 15th 1937. He was an American writer of weird fiction and horror fiction. He never got the recognition he deserved during his lifetime. In fact, he wasn’t even able to support himself from his earnings as a writer.

He met his sad end in poverty, finally succumbing to cancer at the age of 46.

Chances are you’ve heard his name. But if you haven’t, you’ve most definitely heard of his work.

H.P Lovecraft was the one who established the genre of cosmic horror (or Lovecraftian horror) that slithered into the mainstream in recent years. This includes the whole Chthulhu Mythos and its slimy, tentacly, unimaginable cosmic glory.

Even though it is undeniable that the writer H. P. Lovecraft changed modern horror forever, the person H. P. Lovecrat’s life was a very sad one.

Lovecraft was born in Providence, Rhode Island. At an early age, tragedy already crept its way into young Howard’s life. His father, Winfield Scott Lovecraft, committed suicide when Howard was just 3 years old. During his lifetime, Lovecraft insisted that his father was a hard-working man who died from psychosis related to overworking himself. But the truth is everything but.

Winfield’s Death Certificate shows that he had late-stage syphilis. This disease wasn’t treatable back then, and even today, if treated in the later stages, it leaves permanent damage to many organs. Lovecraft’s father probably got this disease from visiting the brothels behind his mother’s back. At the end of the day, whether Lovecraft was misleading everyone or was genuinely believing he was a good man remains a mystery.

After his father died, Lovecraft and his mother went to live with his maternal grandparents. His mother, Susie Philips Lovecraft, always pampered him. His grandfather, Whipple, became like a father to him, and it was he who planted the love for reading into young Howard’s mind. It was at this young age that Lovecraft was introduced to his earliest literature influences, like the Metamorphoses and Coleridge’s The Rime of the Ancient Mariner. 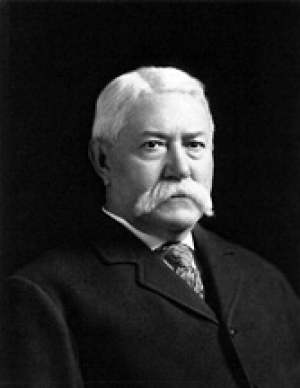 When his grandmother Robie died, it affected everyone. But, it affected Howard the most. After her passing, he started having recurring nightmares, from which he later drew inspiration for his writing. The influence of The Rime of the Ancient Mariner, specifically Dore’s illustrations of the poem, caused him to dream about the “night-gaunts” which he put into his stories thirty years later.

Bad luck did not stop for the Lovecraft family. In 1904, after the collapse of his business, his grandfather died from a stroke. This had terrible implication for Howard and his mother. They were not able to pay the upkeep of his grandfather’s mansion, so they had to move to a small duplex. Lovecraft himself called this period the darkest time of his life.

The same year, Lovecraft started high-school, a turbulent period for him due to his many mental breakdowns. It’s not like Lovecraft didn’t enjoy high school. He loved it; in fact, he was fascinated with chemistry. He liked astronomy too. But, he wasn’t good at either due to lack of gift in maths. During his final year of high school, he had his worst breakdown yet and he dropped out of school.

He never came back to graduate.

Lovecraft joined the United Amateur Press Association in 1914, aspiring to become a journalist in a very turbulent world that was at the dawn of WWI. But, journalism didn’t work out for him, and the following year, he launched his self-published magazine, naming it The Conservative. Here, he wrote several pieces and essays.

It was around 1917 that Lovecraft got into fiction, mainly influenced by the writing of Lord Dunsany and his Mythos. Also, Lovecrafts earliest works drew inspiration from Edgar Allan Poe whom Lovecraft admired.

His first horror publications were for Weird Tales, a small pulp magazine. They bought some of Lovecraft’s stories in 1923, and with this, Lovecraft tasted the first real success in literature. 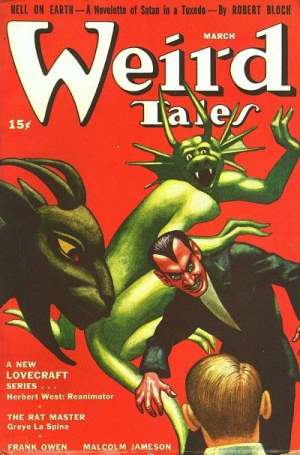 The next year, he married Sonia Green. They both went to live in New York City, but Lovecraft’s nostalgia for Providence led to depression, so they split up after only two years of marriage. He returned back to his home town on Rhode Island and started working on some of his best stories. 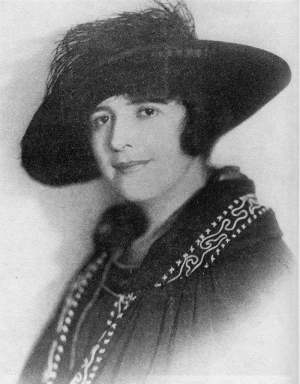 It is in the period after his divorce that Lovecraft wrote some of his best works. “The Call of Cthulhu”, his most famous work, was written in 1928, and it is perhaps the most famous evidence of Lovecraft’s genius at work.

During this period, he introduced his Mythos of otherworldly creatures. He wrote them as unimaginable to mankind and indifferent about humans. The whole concept of the Mythos is the insignificance of mankind, for Lovecraft himself was feeling insignificant in the world of flooding immigrants unfolding before him. This fear turned into racist idealism, and is extremely evident in his works.

The evidence lies is depictions of half-human beings and evil apparitions, giving them visual and behavioral properties of all the different nations that were coming to America.

Still, Lovecraft’s ideals were a mirror to the society of the time, and this doesn’t change the fact that his works are exceptional. Judging his works based on racism would be the same as judging Peter Pan, Robinson Crusoe, and most of Mark Twain’s works.

Putting all blatant racism aside, it is the influence on modern horror that gives Lovecraft his place amongst literature’s greatest.

Although he was unknown during his lifetime and died in poverty, H.P. Lovecraft is now considered one of the most influential 20th-century authors.

Before his works, Cosmic Horror wasn’t a thing. No matter how fantastical literature got, every divine creature had a clear depiction. They were portrayed, visualized, explained, and rationalized.

Such is not the case with Lovecraft’s Mythos. There’s a reason Cthulhu is the most famous of the vast Mythos he conceived. Out of all the things Lovecraft put to paper, he is one of the few things vaguely having any human characteristics. The rest of them are bubbling masses of tentacles, eyes, and all in all, amorphous blobs.

As the Mythos goes, just looking at any of them would drive a person utterly insane.

The reality is that most of you reading this have already seen something Lovecraftian. A movie (Alien, The Thing), a game (Bloodborne, Dark Souls, Quake), music (Call of Ktulu – Metallica) or a book (Steven King’s “The Mist”) - all have been directly influenced by Lovecraftian horror.

The Problem with Lovecraft’s Style

Some people might argue that Lovecraft struggled with expressing himself on paper, and they have a strong ground for this claim. His writing style does appear to be monotonous, overcompensated with adjectives upon adjectives. People simply have a hard time to keep up with his long descriptions of indescribable things.

On the surface, his style does appear monotonous, but that’s the whole point. The monotony of human insignificance is represented in the writing itself. Although I do agree his style is not for everyone, Lovecraft wrote like that for a purpose. His adjective-rich style still does bring into the imagination vivid descriptions of things, places, and creatures that otherwise cannot be depicted.

At the end of the day, if you like to read a simplified version of Lovecraft, you can always read the works of Steven King.

The Cthulhu Mythos (Or Yog Sothothery)

Lovecraft has inspired a cult following with his Cthulhu Mythos, even though that wasn’t the name he used for it. He preferred Yog Sothothery, based on the key and the guardian of the gate Yog-Sothoth, one of the Outer Gods from the Mythos.

Nevertheless, all his stories are loosely revolving around the Mythos. There are tons of vague references to various things throughout his writing that are a part of a greater whole.

Here are some of the most known items and deities from the Mythos:

The Great Old One Cthulhu was first mentioned in the short story “The Call of Cthulhu”. In it, Lovecraft describes a statue of Cthulhu as “a monster of vaguely anthropoid outline, but with an octopus-like head whose face was a mass of feelers, a scaly, rubbery-looking body, prodigious claws on hind and fore feet, and long, narrow wings behind.”

It is with Yog-Sothoth that all familiarity with mankind, and anything living and breathing, ends. Yog-Sothoth is described as a cluster of glowing spheres. In some depictions, he has tentacles and eyes, in some it’s just the spheres. 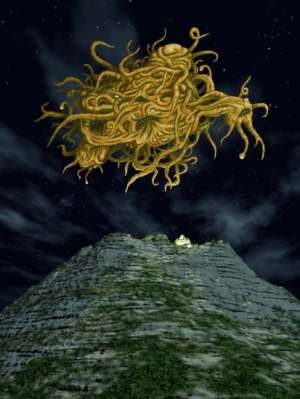 Azathoth is the “Demon Sultan”, the “Blind Idiot God”, and the strongest deity in the Lovecraftian Mythos. He’s the eternal dreamer who dreamed the universe into existence, and awaking him means the end of everything. 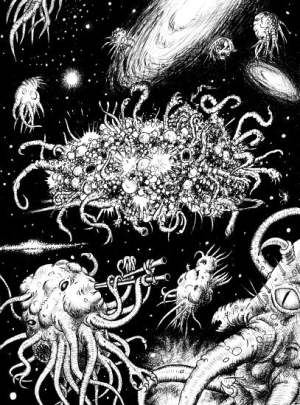 In this sleeping state, Azathoth devours whole worlds without even being conscious. He’s kept asleep by the flutes and drums of countless lesser deities playing a maddening song to him. It’s heavily implied that Azathoth lies at the center of the Milky Way Galaxy.

The Dream-Quest of Unknown Kadath is the first work in which Azathoth is mentioned.

Nevertheless, despite being depicted as mindless “idiot god”, Azathoth does have a will on his own. Its his avatar, Nyarlathotep, who is the being that delivers Azathoths will and commands.

Nyarlathotep, also known as the Crawling Chaos, is the avatar or the “Blind Idiot God” Azathoth. Although the deity has been described taking many forms, his most prominent is the “tall, swarthy man” who resembles an Egyptian pharaoh. 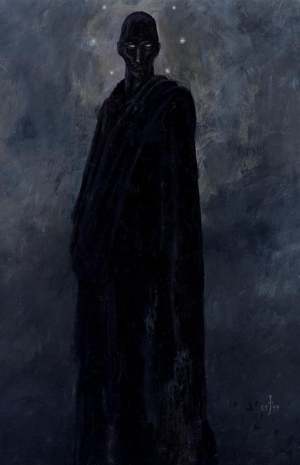 Out of all creature of Lovecraft’s, Nyarlathothep is the most active one, and he is constantly walking the Earth and acting. While the rest of the Gods mind their business, he is here to take care of their affairs in their absence. `

He first appeared in “Nyarhathotep”, a story in which he wanders the Earth gathering legions of followers, the protagonist of the story becoming one of them.

Dagon is the deity presiding over the Deep Ones, an amphibious humanoid race that’s living in Earth’s oceans. He’s much alike these Deep Ones, although enormous in size. He’s worshipped by both humans and Deep Ones, and humans who worship him later evolve to become Deep Ones themselves. They evolve from humans to amphibious creatures and return back to their true home – the ocean. 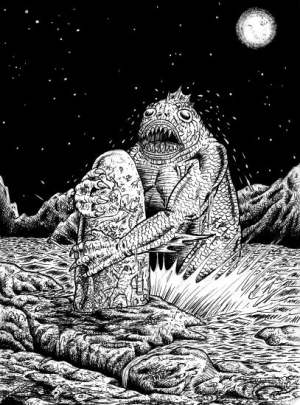 Dagon was first mentioned in one of Lovecraft’s earliest works, “Dagon”.

Perhaps the most famous work of Lovecraft about the Deep Ones and their deity is “The Shadow over Innsmouth.”

The Necronomicon, written by the Mad Arab Abdul Alhazred, is a book that’s quoted throughout Lovecraft’s works.