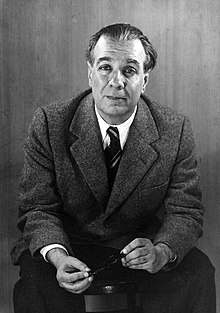 J. L. Borges: “Everything and Nothing”

J.L. Borges is an Argentine writer, essayist, poet and translator, and one of the most important figures of Hispanic literature.

His works have a major contribution to philosophical literature as well as the fantasy genre. Borges’ essay “Everything and Nothing” is an attempt to convey the character of the man that William Shakespeare was as a human being from what little is known about this aspect of the Bard’s life.

Despite being well educated for the time he lived in, Shakespeare had his flaws, especially when it comes to Latin and Greek. This fact was pointed out on numerous occasions. “He thought at one point that books might hold some remedy for his condition, and so he learned the ‘little Latin and less Greek’ that a contemporary would later mention” (Borges, 1958).

This is an interpretation of Ben Jonson’s “To the Memory of My Beloved Master William Shakespeare and what He Hath Left Us”. This poem, written soon after Shakespeare’s death, represents a great moment in literary history when one of the two bitter rivals sets aside all differences he had with the other in order to celebrate his life and work after the other passed away.

Borges uses these lines on purpose because they show how much respect Jonson had for Shakespeare even though they were bitter rivals when Shakespeare’s was alive. The best part of this is that, even though Jonson praises Shakespeare in the poem, he still makes a jab at Shakespeare’s flawed Latin and Greek.

Besides playwriting, Shakespeare did play some minor roles in his plays. “In London he found the calling he had been predestined to; he became an actor… for an audience of people who play at taking him for that person” (Borges, 1958). This is derived from actual data about Shakespeare’s life. It is certain that he played some minor roles in his plays, like the ghost of Hamlet’s father.

But, Borges gives his own twist at this fact – even though Shakespeare was satisfied by acting, when the play ended no one would recognize Shakespeare as Shakespeare, but he would be recognized as the character he played. This is purely an artistic approach about what Shakespeare might have felt. It’s all based on Borges’ own approach, and it is interesting to say the least.

Shakespeare Became Many, but not Himself

The fact that there is no actual data about Shakespeare’s inner thoughts about matters gives a lot of opportunities for the imagination. “No one was as many men as that man — that man whose repertoire, like that of the Egyptian Proteus, was all the appearances of being” (Borges, 1958). The term Egyptian Proteus is a clever comparison by Borges, with the literal meaning of an adjective ‘versatile’; ‘capable of assuming many forms’. Borges’ take on Shakespeare is that he lived and breathed through his characters, becoming each and every one of them. But the sad part is, being too busy becoming each of his characters, Shakespeare ended up becoming no one himself, referring to the fact that we have no data about his mindset and his thoughts at all.

Some literary critics elevate Shakespeare to divinity, and Borges is no exception: “History adds that before or after he died, he discovered himself standing before God, and said to Him: ‘I, who have been so many men in vain, wish to be one, to be myself’. God’s voice answered him out of a whirlwind: ‘I, too, am not I; I dreamed the world as you, Shakespeare, dreamed your own work, and among the forms of my dream are you, who like me, are many, yet no one’ (Borges, 1958).

Borges Elevates the Bard to Divinity

This is the climax of Borges’ essay. He too, like Jonson, elevates Shakespeare to divinity, making him the one and the same like God the Creator, for both God and Shakespeare created universes so complex and alive that they are similar to each other.

By far the most interesting part of this statement is that the comparison is actually reasonable: both Shakespeare and God are left to the interpretation of people and how they understand them. Both are mysterious figures, each having left a legacy of written texts to testify about what they might be like; but in the end, the most that one can actually do is to speculate about both God and Shakespeare. Both God and Shakespeare are the many interpretations of how people perceive them, but in the end there is no definite God and no definite Shakespeare.

There are many attempts to depict what Shakespeare was as a human being. But, there aren’t many that come close to Borges, with the exception of Edward Bond’s Bingo. Borges’ attempt is filled with fusions between facts about the Bard’s life and Borges’ own imagination and what comes out from this is the artful view on Shakespeare present in Everything and Nothing. By the end of the essay, Borges, like Jonson and many others, raises the Bard to divinity. This is not strange at all, considering the influence Shakespeare had and is still having on literature and people in general with his works.