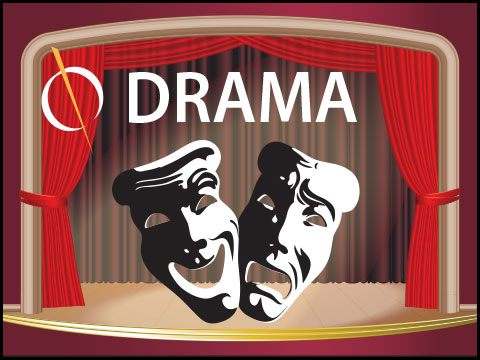 The English drama proper started during the reign of Queen Elizabeth I. But, this doesn’t mean that it appeared out of thin air. In fact, drama was being slowly built up to become what it was in Elizabethan and Jacobean England for a very long time. The truth is that drama started its infancy way before Elizabeth came on the throne.

English Drama Started As Early as the 9th Century

Side note: If you haven't read the first part on "How to Read Shakespeare," please read it because it provides insight on how the Renaissance came to be in England.

Now, let's get on with the history of English Drama itself.

From as early as the ninth century, there are findings of original dramatic dialogue inserted into the Mass for Easter Sunday. For those who don’t know, on this day, the Resurrection of Christ is celebrated, and this was a perfect opportunity for dramatization, since the Bible offers all the raw materials for a play. In these writings, there’s a dialogue between the Angels at Christ’s tomb and the three Marys who came to look at his body. And this made the Resurrection real and immediate through dramatic dialogue.

These short presentations were called tropes.

What Is a Trope

A trope was a short insert into the Mass at Easter which constituted of a short passage of dramatic dialogue. Its function was to further dramatize the climax of the Resurrection. Similar dramatic presentations were held on Good Friday and at Christmas.

With Christmas, there were unique dramatic possibilities due to the importance of the birth of Christ.

The Biblical Influence on Early Dramatizations

As you can tell, the Bible played an enormous part in the inception of English drama. The language of all these early dramatic pieces was Latin. Later, they developed to be very complex dramatizations of the Bible called the Liturgical Drama. Their text was sung and the actors were exclusively priests.

The vernacular language later seen in Elizabethan times had no place in drama at this point in time – religious drama was, after all, a part of Church ceremonies.

In the 11th century, when the Normans invaded England, they brought with them the sacred drama. Shortly after, this type of drama became extremely popular.

Plays about the Gospel and the miracles of saints became very complex, required better ‘stage management’ and eventually became complete presentations. These presentations were outside of the Church, and had no connection with it. They were held in the churchyard, only to later be held in the town itself. This is where the secularization of drama really began.

The Secularization of Drama

What does “secularization of drama” really mean?

It means that the control of and participation in these dramatic pieces was by non-religious people in the street, as opposed to the priest in the Church.

The more important change here was that the language shifted from Latin to vernacular.

Not that priests stopped performing – they still did, for a time. But then, citizens of the town started performing, and sometimes wandering actors, singers, and jugglers came and joined the party.

By the middle of the 14th century, the Mystery Plays became unrelated with the services of the Church and were in the hands of the craft guilds. The Church itself began to dislike them and started forbidding clerical participation in these acts.

What this meant was that a priest could act Christ’s resurrection in church – this was all fine. But, when it came to act on highways and greenery, it was a different matter. Here, these were regarded as entertainment rather than religious teachings.

Which leads us to the Miracle Plays.

Miracle Plays were plays that came out of the churches into the towns, and, for most part, dealt with the miracles of Christ and his followers.

The day of Corpus Christi and Whitsuntide feast were chosen by the guilds for the presentation of a cycle of plays. These plays were based on episodes from the Bible, and are called Mystery Plays. The term ‘mystery’ refers to the spiritual system of Christ’s redemption of mankind, and Mystery Plays are dramatizations of the Old Testament, which foretold this redemption, and the New Testament, which recounts it.

Although the Mystery Plays originated from the Church, the guilds took control over them.

The Craft Guilds were organizations of skilled men who produced the Mystery Plays. Each guild was responsible for putting on a traditional play during the christian holidays. The cycle of plays presented on Corpus Christi became the most important social activity for them, as each guild chose an episode of the Bible to perform during this period.

These episodes were appropriate to the guild’s craft. In some towns, each company had a wagon that served as a makeshift stage. The wagon was moved from one strategic point to another, and the play was performed numerous times in a day.

From these activities came many plays and many guilds.

The guilds from this period are:

The Wakefield Cycle presented 38 plays, all of which were written by one man who is only known as The Wakefield Master. Their play written according to the Gospel of St. Luke, The Second Shepherd’s Play, is the best known play from this period.

Each guild had their own decorated cart (or pageant), which was a portable stage dragged through the town. It was set up at different spots, served as a stage for the day, and then was put back to a shed, waiting for the next year to come.

The plays were presented in a strict chronological order, starting from the Fall of Lucifer, ending with the Day of Judgement. All plays were anonymous, and contained lots of humor.

What Makes These Works Drama?

There are a couple of characteristics which are the base of any drama work:

There are a couple of characteristics which are the base of any drama work, which are:

Since these early plays had all of the above, we can classify them as drama.

The morality plays were plays from this period which were quite different. They didn’t take their subject from the Bible, but instead, they tried to teach moral lessons through allegory.

They were a dramatized sermon presenting human life as continuous moral conflict. In the Middle Ages, these sermons were dramatic and were tackling the problem of individual salvation and damnation.

Everyman (1500) is a great example of a Morality Play.

I can’t go over Morality Plays without mentioning the interlude. The interlude was a short play performed in the middle of something else, like a feast or a ceremony. Imagine a Lord in their castle watching a refined version of a morality play. These aristocratic morality plays, played as an interlude, can often be assigned an author.

So far, we’ve established the Medieval Dramatic genres. They are:

These represent the raw materials which Elizabethan drama gathered together. The noble houses had their own groups of players who wore the livery of their masters. These later became the Elizabethan Companies, including names like the Lord Admiral’s Men, The King’s Men (Shakespeare's Company), and so on.

The wandering players of moralities, staging plays in inn-yards, are soon to take over these inn-yards as permanent theaters.