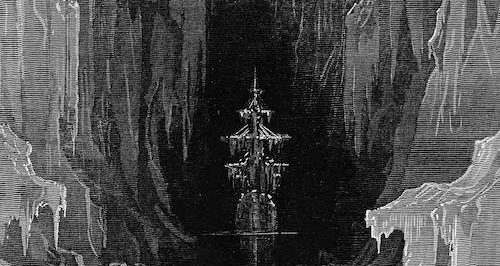 The Rime of the Ancient Mariner’s Supernatural Symbolism

The Rime of the Ancient Mariner was published in 1798. And, in not just any publication, but the collaborative work of W. Wordsworth and S.T. Coleridge. This work is simply named Lyrical Ballads and Other Poems, and Rime is the opening piece of the collection. Besides containing what is one of the best poems ever created, this collection marked the rise of a brand new literary movement in England. This movement is, of course, the Romanticism.

To say this poem is exceptional is an understatement. It’s a prime example of the “leave any doubt aside when reading this thing about ghosts and stuff”, a trademark of Coleridge's. He called it suspense of disbelief.

What’s so Special About Coleridge?

To put it bluntly, Coleridge was the Snoop Dogg of the 18th century. Him being high all the time probably has something to do with this poem being as awesome as it is. In case you weren’t familiar, Coleridge and opium were like bread and butter. Even his poem Kubla Khan was written under influence. There’s an anecdote that some friend of his interrupted him right when he started the poem, spoiled his “trip”, and he lost the inspiration. Hence the shift from an epic poem to a lamentation about lost inspiration right in the middle of Kubla. But, I digress. Still, opium is one hell of a drug, I guess.

The Supernatural in the Rime of the Ancient Mariner

When it comes to supernatural elements in a Coleridge poem, well, there are lots. The Rime of the Ancient Mariner isn’t an exception. The most important are:

• Nature as the Spirit from the land of mist and snow;

• The ones aboard said hulk - Death and Life in Death;

• And, of course, undead, because why not.

At first glance, the albatross seems innocent and seems like there is nothing supernatural related to it. The reality is that it is the glue which keeps together everything from falling apart.

It all starts in the real world, with an albatross flying to a ship. An everyday thing. This is the trick Coleridge uses to slowly lure the reader into all the supernatural stuff happening later. As George Whalley puts it, the bird connects the voyage, the supernatural machinery, and the unfolding cycle of punishment for the killing of the “savior” of the crew. The funny part is that the bird isn’t a supernatural being itself. Nonetheless, it symbolizes Christ and his sacrifice for mankind. 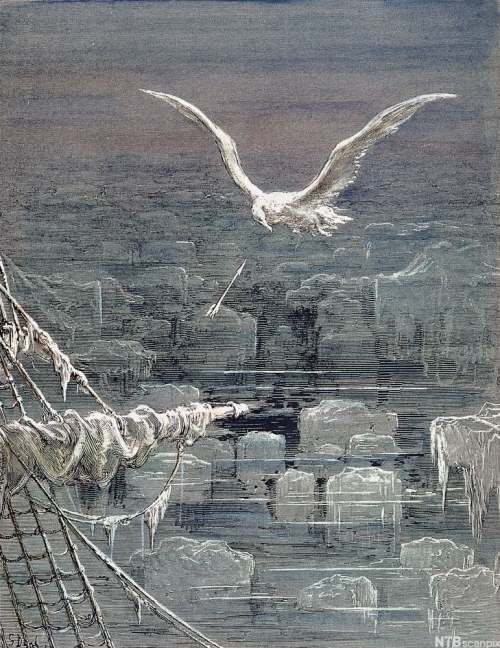 The albatross is central to the plot of the whole story of the poem. The act of shooting the albatross symbolizes the Fall. It’s a universal fall, alike both the fall of humanity and the fall of Lucifer. It’s a Fall from God’s grace.

Nothing pushes the mariner to do it. The act is a condition of his own will, there are no witches to circle a cauldron igniting some deeply buried ambitions. The Mariner has no reason to shoot the bird, and he falls from God’s grace on his own will, without outside influence.

Supernatural calamities start to take place after the death of the albatross. The Spirit of the land of mist and snow follows the ship and torments the crew with the heat of the Sun and burdens them with hellish thirst. Which brings us to the next part:

Death and Life in Death

As if things weren’t already going to hell, Death and Life in Death arrive on a “naked hulk” with “sails that glance in the Sun,... Like restless gossamers”. They are the ones who start the punishment for the mariner and his crew. They roll a dice to decide which of them will have the crew. Death wins all them except the Mariner. Life in Death wins him. 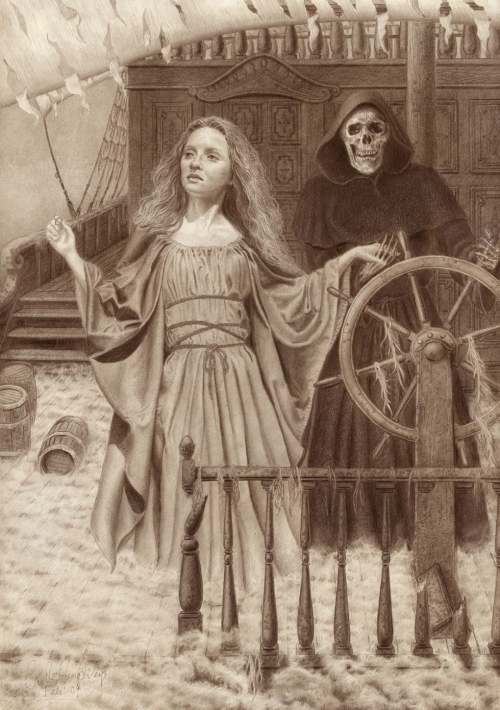 And so, the Mariner is branded with the curse of life in death. Even if he lives, he could never truly be alive. This is a form of Divine punishment for killing the albatross, both for the Mariner and his crew. In a true romanticist way, Coleridge never depicts the cruel reality of death and decay. As the mariners die, and the torment continues, their bodies aren’t rotting. Even Death itself is presented pretty nicely, because it is, well, Death.

His fellow crew firstly condemn the mariner for killing the bird. But this was when they thought that it had brought the favorable breeze. When the fog clears (which happens after the mariner kills the bird), they pat him on the back for the “great job” he has done. Thus, have duplicated the crime of the mariner. This is why they all die.

So, the mariner is truly in a pickle. Alone with only “a thousand slimy things” around for him to curse. But, as the torment reaches the peak, the mariner prays for the beauty of everything. Even the slimy things writhing in the water. And, just like that, he’s saved. Well, not exactly saved, but saved from the Divine punishment. He repented, and his sin has been washed off. But, he still needs to get home. Remember, Death took the souls of all 200 men, only leaving the mariner alive. But, after the mariner prays for the beauty of the “slimy things”, the empty husks of the crew get empowered by good spirits. As the Mariner himself states “The body of my brother's son/ Stood by me…/ But he said nought to me.” They man the ship, sail it to safety, and the mariner is rescued by the pilot and his boat. And the ship sinks like lead into the sea. 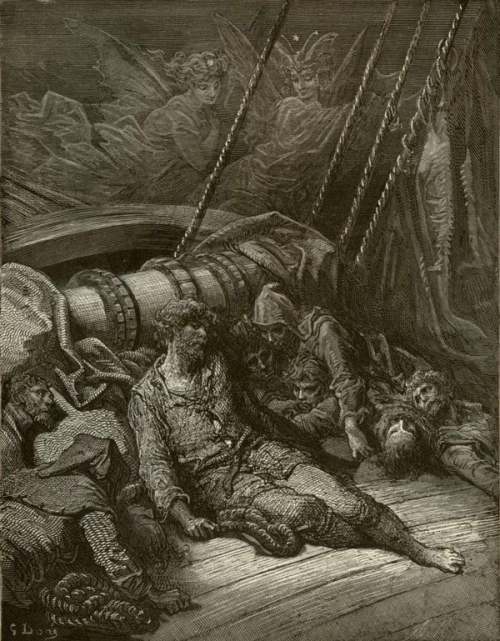 In the end, the mariner is forever bound to tell of his story. The story of how he killed an innocent bird and with it fell from grace. And, the guest and the reader are both sadder and wiser people.

This poem is evident of Coleridge’s ingenious notion of suspense of disbelief. He introduces the poem with a very real setting and vivid descriptions. Starting from the wedding ceremony and the ship, everything seems pretty normal. But, then he lures the reader into the supernatural. It all happens when he kills the albatross and it all goes to heck afterward with a precise transition from the real to unreal. The reader feels the lamentation of the Mariner as if they were there. To be even more meta, the wedding guest is you – the reader, as he falls for the same slow transition from real to unreal. He too is slowly eased into the Mariner’s story just as we, the readers, are.

Fun fact: if you’ve heard the phrase “to have an albatross around your neck”, this is where it came from.

This website uses cookies to improve your experience while you navigate through the website. Out of these cookies, the cookies that are categorized as necessary are stored on your browser as they are essential for the working of basic functionalities of the website. We also use third-party cookies that help us analyze and understand how you use this website. These cookies will be stored in your browser only with your consent. You also have the option to opt-out of these cookies. But opting out of some of these cookies may have an effect on your browsing experience.
<a class="cli-privacy-readmore" aria-label="Show more" role="button" data-readmore-text="Show more" data-readless-text